The Dogwoods ~
Pleasures From The Northwoods 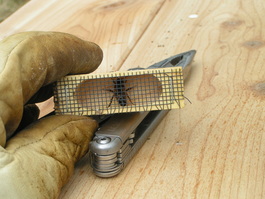 The worker bee has many jobs... 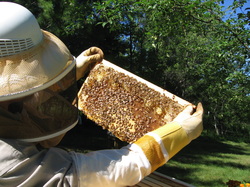 The male or drone bee... 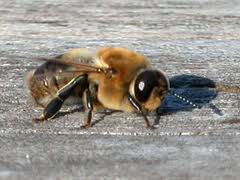 Notice the big eyes on this fellow!  They help him locate the virgin queen on her mating flight.  Mating is the drone's only function.  Shortly after mating, he will die.  The majority of drones never mate with a queen.  They simply hang out all summer, eating honey and waiting for a virgin queen, which in fact may not happen.  It's a great life for them.  But with nature there is always a catch... 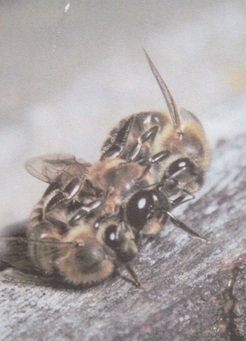 Come winter the males are no longer needed and are banished from the hive.  Like the poor fellow shown here, the female worker bees literally grab the drones and physically throw them out where they perish to the elements.  This is done to preserve the honey stored in the hive so it will last the winter.  The drones are big bees and consume large amounts of honey.  As no virgin queen will appear for mating in the winter, the drones are not needed. 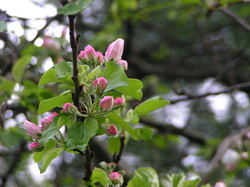 Foraging bees must visit 5 million flowers to make one pound of honey.

To make 150 pounds of honey, the bees must fly a distance equal to 13 round trips to the moon.

Did you also know? 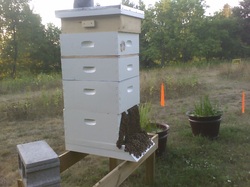 Bees can fly a maximum speed of 15 miles per hour and their wings beat 300 times every second.

What's inside the white boxes? 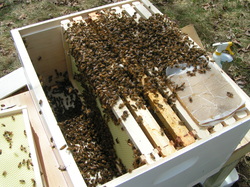 One or more white boxes  make a hive.  Each box is called a brood chamer or honey super.  Each one contains 10 frames of very thin wax foundation.  The bees have special glands that make wax.  They use this wax to build comb on the was foundation.  When the comb is deep enough, the queen will use it to lay eggs in the brood chamber or the workers will use it to store honey in the honey super.

How do you get honey out of the comb? 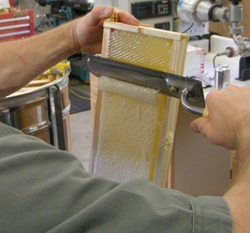 When the honey reaches a specific moisture content, it is considered cured.  When it is cured, the bees seal the top of the comb with a thin layer of snow white wax called "cappings".  The first thing beekeepers have to do is remove the cappings before they can harvest the honey.  Small scale honey producers do this with a hot knife as shown at the left.  Large honey producers have specialized equipment to handle the job.

Centrifugal force spins the honey out. 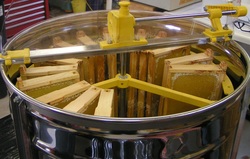 Once the cappings are removed from both sides of the frames, they are loaded into a special machine called a "honey extractor".  By spinning the frames in the extractor, centrifugal force spins the honey out of the comb.  It strikes the stainles steel walls of the extractor where it then runs down to the bottom of the tank.  A valve is used to drain honey from the tank.  The honey is then run through three filters and placed into a holding container after which time it is bottled, labeled, and sealed and now ready to be sold.

Where do honey bees go in the winter? 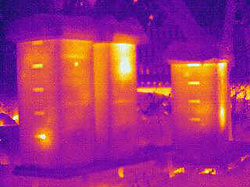 Honey bees do not go dormant or hibernate like many other insects.  The bees gather together and form a ball which is called a "cluster".  By shivering, they generate enough heat to keep the cluster at approximately 98 degrees all winter.  The infrared picture to the left shows the heat that is produced in the hives.  Yellow indicates the hottest areas.

Survival of the fittest... 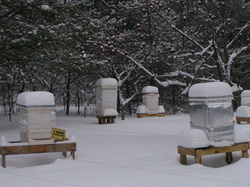 While many beekeepers clean out and empty their hives at the end of each season, we prefer to try to "over winter" our bees.  It just seems to be the humane thing to do.  Insulating is key to help preserve your bees and many different products can be used to wrap the hives.  Of course a good number of the bees will succumb to their death because of the long, hard winters here in Northern Wisconsin but the purchase of new bees just before springtime always helps to replenish the hives and prepare for the new season.